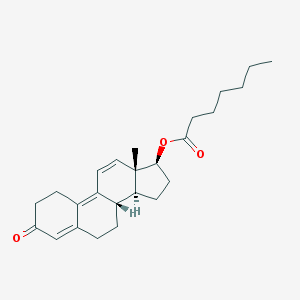 As previously mentioned, Trenbolone Enanthate is a long ester variant of the hormone Trenbolone. Trenbolone, being a derivative of Nandrolone (the base hormone in Deca-Durabolin), is a 19-nor anabolic steroid. 19-nor compounds are characterized by their lack of a 19th carbon on the steroid structure, which also brings Trenbolone the classification of a progestin as well. Through it’s modifications from Nandrolone, it introduces two double-bonds between carbons 11 and 9, and it is this chemical modification that effectively makes Trenbolone totally immune to aromatization (conversion into Estrogen) by way of the aromatase enzyme as well as increasing the strength at which Trenbolone binds to the androgen receptor[2]. That is to say that Trenbolone will not produce any estrogenic side effects alone, and that it is an extremely potent and very strong anabolic steroid with an anabolic:androgenic ratio of 500:500. Compared to Testosterone, this is staggering, as Testosterone expresses an anabolic:androgenic ratio of 100:100. Hence, we can see how and why Trenbolone is five times the strength of Testosterone. Its chemical modifications also allow it a stronger resistance to metabolism in the body, allowing even more maximization of its anabolic capabilities in muscle tissue. Lastly, Trenbolone Enanthate possesses the enanthate ester, affixed at the 17-beta hydroxyl group on the steroid structure. This, as mentioned many times already, slows the release rate and also extends Trenbolone’s half-life in the body to approximately 7 – 10 days.

How Does Trenbolone Enanthate Work and How Is It Best Used?

Because Trenbolone Enanthate exhibits a half-life of approximately 7 – 10 days and is presently more common than its other long-ester counterpart Parabolan, it provides many users who are mostly needle-shy or find frequent injections inconvenient with a more convenient form of Trenbolone to use. In contrast with Trenbolone Acetate, which requires every other day injections at the very least, Trenbolone Enanthate requires administration only twice per week with each injection spread evenly apart (Monday and Thursday, for example). Because Trenbolone is considered an intermediate-advanced level anabolic steroid, the majority of users of this compound are usually well aware of the ins and outs of it.  Many intermediates making their first step to Trenbolone will prefer Trenbolone Enanthate due to the convenience of less frequent injections. However, the disadvantage to this is the fact that Trenbolone is an anabolic steroid that is extremely powerful and does carry with it some potential side effects unseen with any other compounds. It has therefore been labelled as a ‘harsh’ anabolic steroid, and beginners to Trenbolone who are wondering which form to use might want to opt for Trenbolone Acetate instead. The reason being that the faster half-life of Trenbolone Acetate ensures that blood levels of Trenbolone rise quickly and fall quickly as well, ensuring a fast clearance from the body should any issues arise and the user wishes to stop. With Trenbolone Enanthate, two weeks is what is required before Trenbolone is completely clear of the body, during which time undesirable side-effects might persist.

It is therefore the prerogative of the individual to use this information and decide for themselves whether the convenience of less frequent injections is indeed worth the risk of having to wait two weeks before the drug is clear from the body if any undesirable effects arise. If the user is a well-experienced user of Trenbolone that already understands their body’s reaction, this decision should already be made.

It is important to understand that with long-estered anabolic steroids like Trenbolone Enanthate, the time required for the hormone to reach peak and optimal circulating blood plasma levels is considerably longer than short-estered variants. For example, many individuals report experiencing significant strength gains and/or physique changes by the second or third week with Trenbolone Acetate, but Trenbolone Enanthate might require upwards of 4 – 6 weeks (depending on the individual as well) before the hormone noticeably “kicks in”. Because of the long Enanthate ester, the hormone slowly reaches optimal levels over a period of a few weeks as each dose builds upon the last. Of course, those who wish to speed up this process can always decide to frontload. However, be aware that there are both benefits as well as risks/downsides to such a practice, and frontloading should thoroughly be researched and contemplated before doing so. This is especially true with a compound such as Trenbolone, and is doubly especially true if the user is a first-time Trenbolone user.

In general, Trenbolone Enanthate is what would be considered the advanced Trenbolone user’s Trenbolone. However, this is not to say that plenty of well-experienced Trenbolone veterans won’t utilize Trenbolone Acetate – many do, and many tend to stick with Trenbolone Acetate exclusively forever without touching Tren Enanthate. The take-home point here is that Trenbolone Enanthate use is much more common among experienced users rather than bare beginners to Trenbolone, who will most often elect to use Trenbolone Acetate due to the short half-life and therefore relatively quick clearance from the body. This is usually a security precaution in the event that the first-time user encounters a bad experience on Trenbolone and wishes to stop more abruptly than stopping Trenbolone Enanthate would. Tren is best utilized with other similar compounds, but it is absolutely essential that some form of Testosterone be run with it, even if only for the sake of health. It might be a wise idea to limit the amount and/or dosage of aromatizable androgens used with it, as some times the Estrogen-related side effects can be exacerbated when high levels of a progestin is utilized in a high-Estrogen environment. Normally it is Testosterone Enanthate that is commonly combined in cycles with Trenbolone Enanthate, for very obvious reasons.